First, about fifteen minutes into our drive to Hershey, this voicemail popped up on Nick’s phone (somehow we missed the call):

The message is broken up, but it confirms that Tyce will have access to our insurance policy for his care.

You guys, if I haven’t said it already a thousand times, let me said it again: Thank you. We know you’re praying. We can tell.

Nick took my hand as we went down the road to the appointment and we both gulped huge lungfuls of air in relief.

By the time we made it to Tyce’s appointment today, it had been three days since his last bowel movement. If you’ve been reading these updates, you know I’ve been wishing, and hoping, and praying for his little body to make room for his stomach. I was sad when I saw his weight is still 9 pounds 5 ounces, as it has been for two weeks. But our prayers were answered differently.

You see, when we walked in the door of Suite 400, we were met by a gatekeeper of sorts.  Evidently, small town hospitals are sometimes premature in their sighting of Hirschsprungs, because they don’t see children as often and are more easily disoriented by the results they see on the Xray.  They suggested this to us gently before his exam, even insinuating that perhaps we were just there for a consult. I felt my heart sink.

Then they examined him, and his expanded little belly grabbed their attention more seriously.  Suddenly I was thankful for the last three days, thankful that he hadn’t emptied his bowels before that appointment, where his stomach might have deflated to a less impressive girth. Each examiner says the same thing: that’s quite a belly, little guy. 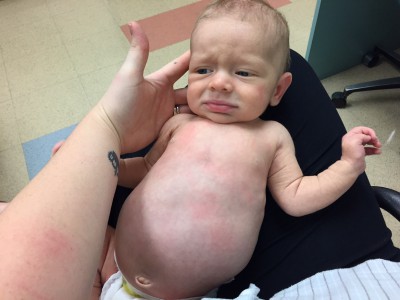 The appointment then changed direction to the path we had prepared for: the biopsy. We took turns holding Tyce and signing paperwork today, but that form, the one for consent, was handed to me. I asked if parents were to be present for the test, because I was becoming more aware that this might be uncomfortable for our little guy. I felt my insides quake and I was afraid. I didn’t want him to hurt and I didn’t want to watch. I was afraid.

They left the decision up to me, and in my fear, I made the wrong decision. I ached as I kissed him one last time on that same spot that is balding (maybe because I kiss him there so often?) and handed him to the ever-so-comforting PA. But then, when I heard his screams seep across the hall, I knew I should have been in there, talking to Tyce from across the room, telling him he was brave.  Maybe so I’d also remember that I was.

I stared at this door, listening to him cry from the other side.  Nick told me to go but I didn’t want to be a sudden distraction for the people administering his care.

The doctor came to get us as soon as the test was over and I bolted to Tyce with the fuzzy blanket we’ve been carrying to all his appointments. The doctor chuckled; in my haste, I left all the bags and carseat for Nick to gather. I cradled his little face to my chest and he calmed immediately. Soon he was asleep and I felt all the muscles in my neck relax and yield into a headache. They warned us that sometimes the samples are insufficient and the test needs repeated but I let all that fade into the background. They took his vitals and taught us how to irrigate his bowels twice a day until the test confirms our next steps. For now, we were done. 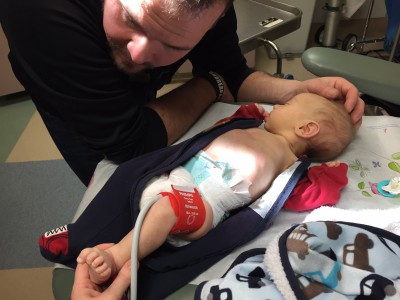 We used some Christmas gift cards to grab a quiet lunch.  I ordered pasta; rare for me but I was so craving something comfortable.  On our drive home, we once again came across this spontaneous worship from Bethel, which brought such renewal to my bones. From the tip of my toes, to the top of my head, they’re going to know I love you…  There’s a line and we’ve crossed it.  Some would say that we’ve lost it. But I’ve found my joy!

Any weariness was erased as my heart knit with Jesus and my husband in those moments (and was finished with a good long nap this afternoon).  I know so many of you have been waiting for an update and I tried earlier, but I kept nodding off.

We expect the biopsy results on Friday (he warned us maybe Monday, to which I warned them how persistent I could be on a phone.)  He is resting how and has fed twice since his test, so hungry he’s slurping on his fist.  Music to my ears.  He seems to be uncomfortable at times but this is familiar territory from his last procedure.

There is so much on my heart from today, from you all, in the millions of ways I see Jesus using this to tie together His family and to bring hope and courage to us all.  Maybe tomorrow.  This moment as I write is made for rest and laughter.  New Years Eve is here.